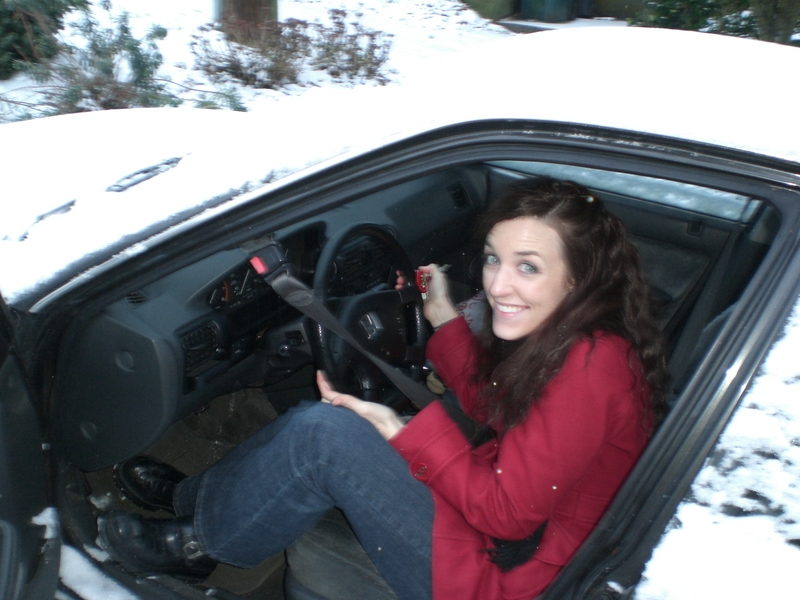 It hit me today: my car is old.

Roughly 50% of girls born the same year as my car have already lost their virginity.

1990 doesn’t sound like it was all that long ago, but then I remember that in 1990, Phil Collins’ “Another Day in Paradise” was at the top of the charts. I’m pretty sure that it’s the year that Nicky and Alex were born to Uncle Jesse and Becky on “Full House.” And Kevin Costner made women swoon as Dances with Wolves… although I was far too young for those hot teepee love scenes until, well, this year.

The past 17 years have been very full for my Honda Accord. My friend Lisa bought it brand new in 1990, and then sold it to me in 2000 after it had been stolen, missing for long enough that she got a new car, and then recovered. It had been stolen by a drug dealer and involved in a HIGH SPEED POLICE SHOOT OUT; the bad assery of the situation screamed my name, and I knew that the car had to be mine.

For 7 years, the Honda has been my trusty transportation to life. I have spent thousands of hours driving around Seattle, down the Pacific coast, east across the mountains, to Kansas and back multiple times, through snowstorms, fog, rain, and scorching heat. Fast, smooth, and quiet, it shifts easily and can be parked anywhere (which is also due to the fact that I am the self-proclaimed champion of the hypothetical Parallel Parking Olympics). It assisted me in getting a $480 speeding ticket, and a $190 parking ticket. It’s an icon of my college experience, my becoming a grown up, my beloved Seattle and the years I have spent here.

But one day, it started: it lost a hubcap. And consequently, officially looked dumpy. I am too lazy and broke to order a new one, not to mention how do you put on a new hubcap? It just looks old. I could never pull up to a valet with these wheels… not that I ever have the opportunity… but still. THEORETICALLY.

Little things have started to break, and my patch-work repairs cannot keep up. Bungee cords can only take you so far, and now is probably the time to mention that you should never super-glue the headlight casing into place, even if it looks less conspicuous than duct tape. I am down to half a working speaker, which crackles in and out of functionality in the middle of good songs, leading me to cuss, and cuss loudly. It has been broken into multiple times, and was stolen twice in a month this past winter. I am on last name basis with my car repair guys (not to mention the cops), which is WAY cooler than first name basis.

Oh, I have had my little victories. When the speedometer stopped working, I did my research and ordered and installed the part myself. When a knob broke off the dashboard and I spent a good 4 months with perpetual scalding heat coming out of the heater, I eventually figured out how to fix that, too.

But yeah, mostly? The Honda is circling the drain.

As I look ahead to The Big Trip beginning in September, I realize that this will probably be the last hurrah for me with my treasured vehicle. It’s been creaking and groaning. The gas mileage is getting progressively worse and worse. I await the day when it bursts into flames on the freeway, and no amount of money will be able to resurrect it from the dead. Or maybe, I’ll just drive it and drive it and drive it until one day, I know that I cannot take it any further.

When that fateful day comes, I will take it out for a nice long drive, stroke the steering wheel, and tell it how much I love it, that it kills me to let it go, but we both know it’s for the best. Then I’ll wash it, polish it up, and drive it to Canlis. I’ll hand the keys to the valet, and with a swirl of my dress and a flick of my heel, smile and say, “Don’t forget to put the Club on!”