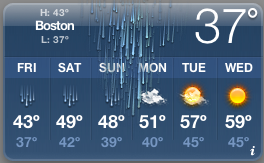 So much has happened in the last day.

First of all, the helium balloon.

Is this the weirdest story ever?  First of all, that this Jiffy Pop contraption actually existed – and in someone’s backyard, no less.  Secondly, that the entire country was thrown into a frenzy when it was reported that there was a 6-year old boy inside, adrift.  And his name was FALCON.

When I found out that he was okay, that he had been hiding the entire time, I was in the airport getting boarding a flight to Boston.  My mom called me and told me that they found him hiding in the garage attic.  And when I hung up the phone, I got all teary – because this is amazing?  This is the best news ever?  And I am PMSing?  So leave me alone.

But then!  I arrive in Boston to the news that it’s gotten even weirder!  The family had been on “Wife Swap” – the show that makes Jon & Kate look like Ward & June Cleaver.  And when asked why he didn’t come out of hiding when he heard his name being called, little Falcon said, “You guys said we did this for the show.”

I’ll choose to just be happy that he’s okay, because this could turn into a circus.

I’m in Boston!  And this is the weather. It’s putting a damper on my plans, since today was meant for some solo exploring outside on foot while my friends are busy.  But you know what?  I’m going to do it anyway.  Here’s where I’m going to go walk in the freezing rain right now: Doesn’t that look like fun?  Walking out into the middle of the ocean??  Around PLEASURE BAY?

And now that I have spent 20 minutes creating a map with arrows that, at this point, is useless to anyone but me, I just want to point you toward one last thing.

My littlest sister, Sarah, is in her last year of nursing school.  The things that nurses know, and know how to do, blows my mind – the medical realm is so far outside my small scope of knowledge.  Last night, she wrote a post about an experience that had me riveted.  I can’t believe how much she has experienced, the lives she is making a difference in, and the incredible path she has chosen.  I am bursting with pride.

“A day away can transform uncertainty and renew the spirit.”
-Maya Angelou