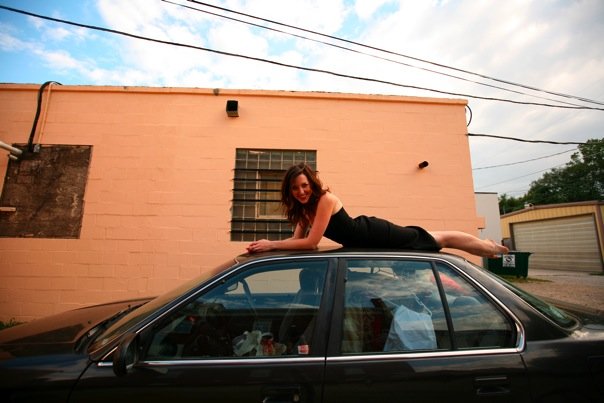 I know.  You have been nervously refreshing the page every moment since last Friday, awaiting an update as to the Honda’s fate.

Well, people, I have good news and bad news.

The good news is that I’m alive.

The bad news is that if oil were blood, my engine would be the beaches of Normandy.

The burning rubber smell of last week was due to an oil leak on par with the BP debacle of 2010 – but I had that under control, and it wasn’t the Honda’s demise.  The unrelated, unexpected, and ultimate downfall came when the timing belt snapped, and there was internal damage to the engine.

The good news is that this happened Sunday morning 8 miles outside of Kansas City, and I’ve been able to stay with my brother and sister-in-law and nephews.

The bad news is that I will never drive the Honda again.

I will never drive the Honda again.

This isn’t how I imagined it would happen.  After all I’ve been through with and in this small-but-mighty car, I envisioned the end to be the engine catching on fire, or hitting a bighorn sheep or something.  I kind of hoped for a more spectacular blaze of glory.  Instead, death came quickly and silently, rolling the Honda to a quiet stop on the shoulder of I-70.

The nail in the coffin was the price quote for a full repair.  Dude, if I had that much money, I would buy Christian Bale to CARRY ME AROUND.

So just after it’s 21st birthday, I am selling my beloved Honda for salvage.  The money I’ll get isn’t enough to cover what I’ve spent in the last 24 hours.  I know, it’s just money.  But still – lame, right?

As for me, I am stranded in Kansas City.

And I haven’t been home for 6 weeks.

I’ll let you figure out how I’m doing.