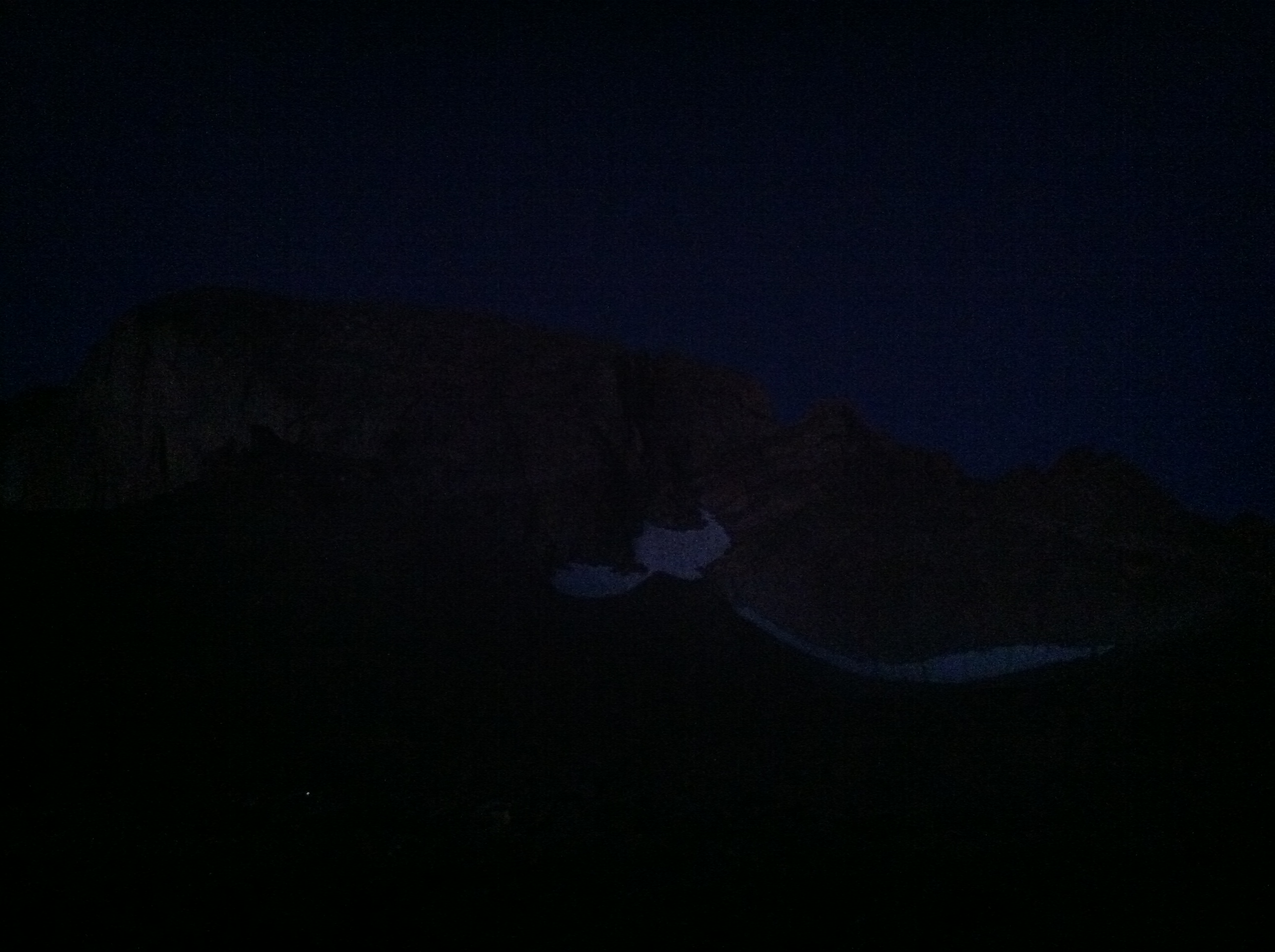 On Saturday, I climbed my 31st 14er, and my toughest one to date, Longs Peak.

Believe me when I tell you that two days later, my entire body hurts.  Not just my quads, y’all – my entire body.  I’m talking about the fronts of my ankles, and the tops of my shoulders, and that fat little hand muscle below the thumb – the one that I imagine would taste like a buffalo wing.  (Consider yourself warned: if we ever find ourselves together in a life or death situation a la “Alive,” I’m going for the buffalo wing.)

The day started just two hours after I went to sleep.  My alarm went off at 12:30am, and I drove to meet the band of strangers that would be my companions for the day.  The only girl in the bunch, I introduced myself, ate a Pop-Tart, and at 2:30am, we were off.

The first 4 hours were in the dark, our path illuminated only by our headlamps and a half moon.  At one point, we turned off our lights to look at the stars – and I can’t remember when I’ve seen stars that bright.  Despite my lack of sleep, I was energetic, and kept up with the men just fine.

As the sky began to grow light, the mountain started to reveal itself. And I turned just in time to see the sun come up. Six miles in, we approached the Keyhole, a huge rock formation that serves as the gateway to the last mile and a half to the summit, and the game changer in terms of terrain.  Up until the Keyhole, it’s just a long hike – but everything from the Keyhole on is a tricky and challenging climb, with an abundance of narrow ledges, loose rock, and near vertical ascensions.  My dad’s advice to me the day before was to “manage my emotions”; he knows me all too well. First came the Ledges, a series of vary narrow ridges along a cliff edge.  Hearing that I’ve historically harbored a fear of exposure, our fearless leader Mark gave me the advice to always keep a hand on the rock wall and to never look down.  Now usually, when presented with the command of “don’t look down,” I almost always look down; ever pragmatic, I want to know the grave reality of my circumstances.  But this time, I took Mark’s advice – and I made it across the Ledges with no moments of panic.

Next was the Trough, a 600 vertical foot couloir (a word that my fellow climber Jim taught me – one that makes me feel très French).  The gully is filled with loose rock, which made the wisdom of our climbing helmets all the more obvious.  At the top of the Trough, I was tired – but we weren’t to the summit yet. Photo by Dan Biro – and that’s my booty

Then came the Narrows, a constricted ledge that took us across another vertical rock face.  Whoever named it “the Narrows” was not messing around; nothing forces you into the present moment like the potential of falling to your death.  I found this video that gives a brief glimpse of the path – and it’s even more dizzying than YouTube makes it look.

Finally, we came to the Homestretch, a polished granite slab at a nearly 90 degree angle.  Hand over foot, it took about 15 minutes to climb 300 feet – and by 9am, we were at the summit. We had gorgeous weather, and stayed on the summit for a full hour – longer than I’ve ever hung out on top of a mountain.  I had a brief moment of cell service, and posted this picture for the world to see – bright eyed and proud to have conquered Longs Peak. (And for those who are keeping score, yes, I realize that this is the exact same picture as the one I took on the summit of Mt. Elbert last summer.  Apparently it’s my signature mountain look.)

Believe it or not, the descent was tougher than the ascent, since we were basically forced to crab walk for a mile and a half back to the Keyhole.  Try climbing off the top of a mountain down steep, sheer rock faces – it’s not for sissies.  Many accidents occur on the way down from a summit, since it’s easy to think that “the hard part is over” when, all the while, your body is that much more tired.

When we made it through the Keyhole and back to the trail, I was exhausted.  It was hard to lift my feet, and my legs felt wobbly.  The miles stretched on and on.  With every twist in the trail, I hoped to see the end – only to be met with more of the same.  It felt like it would last forever.

But 6 hours from the summit, after talking about everything from snowshoeing to dating to “Brian’s Song” (note: if you want to see grown men get emotional, just mention “Brian’s Song”), we emerged from the trees.  We were finished, back at the cars, pulling off boots and peeling off socks.  No matter what you go through, I can tell you this: nothing compares to putting on sandals after a 15-mile excursion.

I was so fortunate to climb with a great group of men through the Colorado Mountain Club – seasoned mountaineers who were encouraging, experienced, and pleasant company – and I am more than proud to check Longs Peak off my list.  It’s a mountain that had given me stress dreams for weeks, as I read first-hand accounts of the challenges (and occasional deaths) along the trail.

But I was encouraged to find that my last few years of mountain climbing have strengthened my courage and confidence; as with so many things in life, experience builds backbone.  I didn’t have any moments of panic, never hyperventilated (something that has happened to me on mountains before), and hand over hand, step by step, focused on one move at a time. This climb forced me to live only in the present moment – which is the only place that life happens, anyway.

Chalk it up to another real life lesson learned in the mountains.