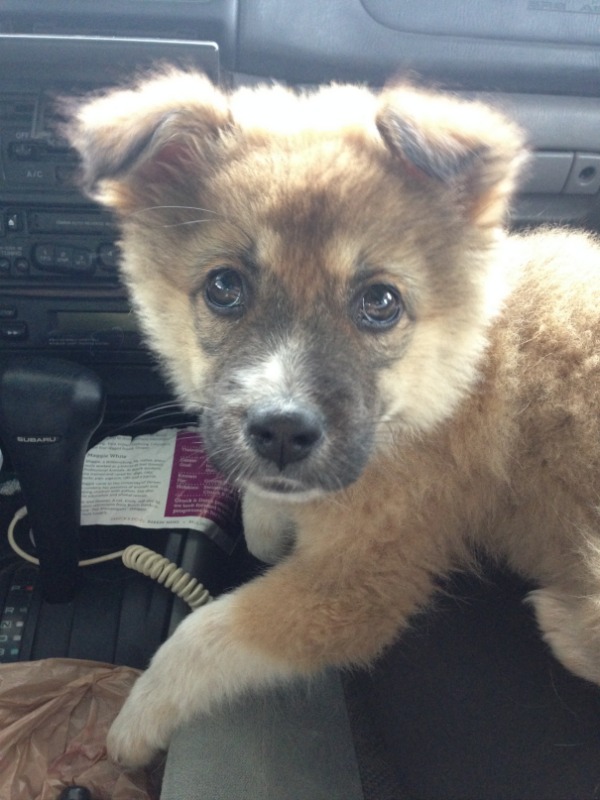 My sister Becca works for All Aboard Animal Rescue, where they pull dogs from high-kill shelters – usually in New Mexico – and bring them to Colorado to adopt them out. Coloradans love dogs. The state animal is probably a Shelter Dog.

About a week ago, I went to one of her adoption events to hold the puppies brought up through the Underground Tailroad (come on, that’s too good), needing a snuggle fix. Since it was the week of Halloween, all of the puppies had been given spooky-themed names: Goblin, Creepy, Crawly, Spider. I was not going to bring one home – but maybe I was asking for it. I fell in love.

Her name was Brains. You don’t want the responsibility of a dog, people say. You travel too much. You’ll lose your freedom. And it’s true – ever since Toad died in July, I’ve really enjoyed having the ability to go wherever, whenever, without the worry of “I have to get home to let the dog out.” Life has been manageable. It’s been easy. I’ve been footloose and fancy-free.

But I’ve also been lonely. And self-focused. And a tiny bit bored.

These are not themes that belong in the life of Annie Parsons.

So after a few days in Minnesota for a work trip, I got back to Denver on Saturday and took custody of my new best friend. She’s a 9-week old mongrel – maybe part Australian Shepherd, part Border Collie, part extra fluff. Her ears are lopsided, one of them being closer to the middle of her forehead than the other – and her little eyebrows are expressive and close together. Meal time is the most exciting thing that’s ever happened to her. Bath time is the worst. She is smart and curious, and sleeps through the night in her crate like a champ. So far, her favorite things are her squeaky turtle and my bed skirt.

And since there is no other word I’d rather have my name associated with on a regular basis, her name is Foxy – Foxy Brains, because she’s more than just a pretty face.

She’s about to ruin my life. For the better.