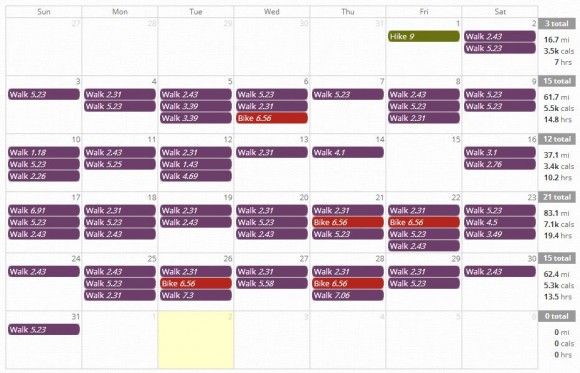 I’ve made nary a murmur in this place for over a month. You want to know why? It’s a little thing called a J-O-B. I went back to work on August 4, and that was that. Because listen, I don’t care how much you love your job – going back after 5 weeks off is rough. August was rough. August was hot. August was a slog, retraining my brain to think in terms of “way too many details” and “never-ending emails” and “calendar deadlines.”

But here we are, August behind us, and September ahead. It’s my sincere intention to write more in September – and I think that maybe that starts tomorrow. For today, let’s play catch up.

In the month of August, I walked hundreds of miles. There are times in my life where my workouts are more than mere walks, but for August, I stuck to hoofing it. As you can see, my “bike to work” days were few and far between – that’s another thing that’s going to change in September. Something else that I’m committed to for September: sticking to using cash envelopes. I need financial accountability, and cold hard Benjamins (okay, Jacksons) seem the best method for right now.

Here’s something we need to talk about: awful TV shows. In August, I watched True Detective and House of Cards. And then I felt so hopeless about the human race that this weekend I binged on season 4 of Friday Night Lights just to renew my faith in humanity (or at least the television version thereof).

This month, I’ll be spending time in Boston, Minneapolis, and Seattle – some pretty great places.

Since I last wrote, I had a birthday and so did Foxy Brains! My tiny puppy has turned into a full grown 1-year old dog, and I couldn’t love her more. Summer is winding down, fall is on its way, and thank goodness – because sheesh, I am in need of some newness. I hope today somehow feels new for you.