Hope on the rocks 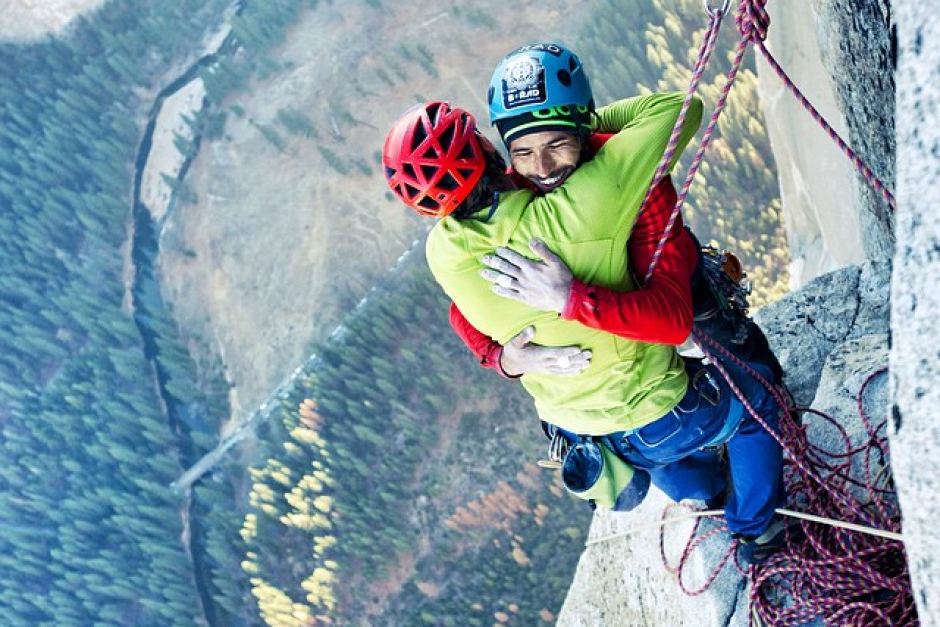 I am not a rock climber. Aside from that ill-fated day at elementary summer camp when I was forced to rappel which resulted in emotional trauma so severe they made a special exception to let me call my mom afterward (thanks a lot, CAMP REDCLOUD), I have never been roped to a rock wall – or, you know, however it works.

But I can’t stop tearing up about Tommy Caldwell and Kevin Jorgeson.

If you haven’t heard, these two climbers made history on Wednesday, being the first people to ever summit El Capitan’s Dawn Wall via free ascent – that is, using only their hands and feet against the natural formation of the rock, and using ropes only to stop a fall. This 3,000 foot (remember, that’s over half a mile) granite slab has long been considered the world’s most difficult rock climb – but after 19 days living in mid-air, sleeping on cliff tents and pooping in bags and having supplies ferried to them by cohorts, they made it.

So why does this make me tear up? Mostly because I gave up on them.

Here were the rules, as I understood them: both men needed to free climb the 32 pitches (segments the length of a rope) without falling. If one fell, he had to start again from the beginning of that section. And Jorgeson? He attempted Pitch 15 time after time, and fell every time. While Caldwell waited above, Jorgeson kept falling. For days.

And in that time, I thought, “Yeah, this isn’t going anywhere. What a bummer – this dream they have isn’t going to come true.”

I come by my negativity honestly. I was raised to be emotionally cautious, opting to prepare for the worst rather than hope for the best, all the while marinating in that Christian pessimism called Calvinism. Stack on top of that a plethora of personal disappointments and a decided absence of fairy tale endings, and you can see why my default might be to assume that all of our best efforts usually end in defeat.

But then again, sometimes they don’t.

After 11 attempts over 7 days, Kevin Jorgeson made it through Pitch 15. And less than a week later, he and Tommy Caldwell reached the top together.

The other night, I was immersed in Sara Hagerty’s beautiful book Every Bitter Thing is Sweet (read it read it read it), completely engrossed in the account of her adoption of two girls from Uganda. It’s an amazing story, full of miracles and unlikely providences. This part stopped me in my tracks:

“It has always been safer to expect that God allows suffering in the interest of refinement. While I still believe this is a significant aspect of his nature, Uganda had given me the chance to discover new frontiers of his generosity. For he also allows joy.”

When they reached the top, Kevin Jorgeson said he hopes that their accomplishment inspires others to “find their own Dawn Wall.” None of our stories will mirror the achievement of Jorgeson and Caldwell exactly – but we all dream of something, right?

I don’t know what you’re hoping for. Some of my dearest friends are waiting for things that feel so far off that at times they seem impossible – waiting to get pregnant, waiting to be matched with a baby to adopt, waiting through a season of prolonged singleness, waiting for a job to improve, waiting for a spouse to change, waiting for an illness to shift, waiting for the pain to lift. I am well aware of the things I am personally waiting for. And hope? Hope can feel cruel – because by its very nature, hope means that the thing we want hasn’t happened yet.

But like I once heard it defined to a child, hope also means “something wonderful is about to happen.”

I’m not a rock climber, and I probably never will be. But I’ll remember Tommy Caldwell and Kevin Jorgeson as long as I live for reminding me to check my doubts at the door – because he also allows joy.