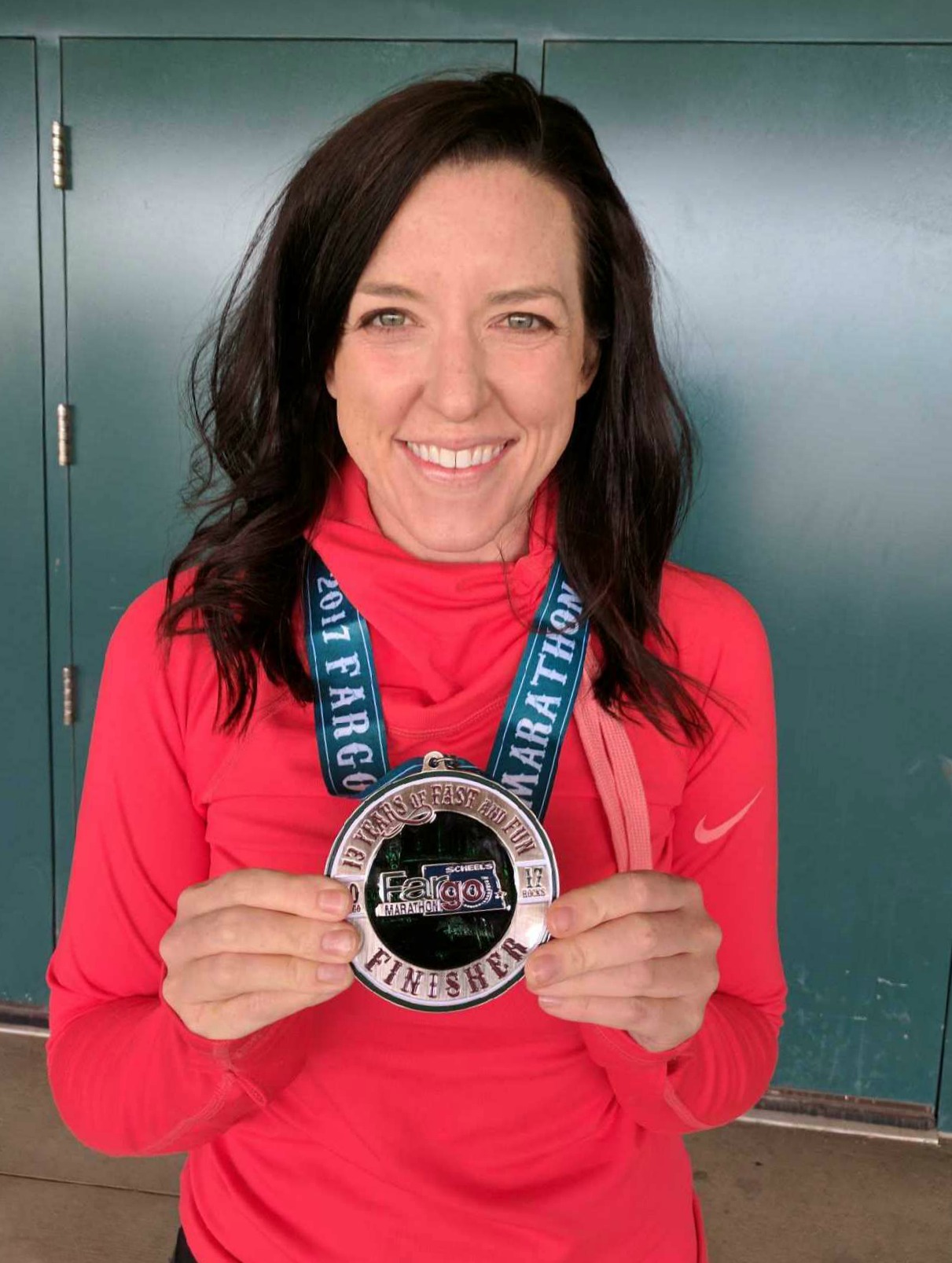 Over the course of the last four and a half months, I ran 434 miles. Last Saturday, all of that training culminated in me running — and I do mean running — the Fargo Marathon. I did it! I ran the entire thing! I never stopped, except this one time (we’ll get to that).

First things first, I will never do it again. I will never run another full marathon. My body just isn’t meant for it. In the last few days of recovery, I’ve felt like an old Volvo whose frame was just sprung in an accident. Everything was rattled and pounded and jarred and thrashed. I’m back to walking, but I’m pretty sure I’ll never be able to squat down to unload groceries into the refrigerator ever again. My knees are talking to me, telling me the deep secrets of their souls. My left glute is permanently crimped. I descend the stairs backward like a toddler, using my hands for balance, butt in the air. Nay, I say to thee: I will live the rest of my days in a safe, padded cocoon, treasure my cartilage, and protect my joints like the precious gifts they are.

But am I sorry I did it? Not a chance. My sister Sarah drove up from Kansas City – 9 hours! – to be race support

The morning of, standing in the chute waiting for the race to start, even before they starting playing “Eye of the Tiger,” I was already tearing up. I couldn’t believe it was finally here, all of the hard work come to fruition. It’s true what they say: the training is the real achievement, and the race is just the victory lap. The first 20 miles went better than I could have ever dreamed. When I did my 20-mile training run, it took me 3 hours 40 minutes; when I hit the 20-mile mark on race day, the time was 3 hours 15 minutes. I was flying! (You know, for me.) Up until that point, I was running 9:55 minute miles, and having a great time. But then I passed mile 20. And you know what’s past mile 20? Hell. Except hell is made of a billion tiny knives stabbing you simultaneously. And then those monkeys from The Wizard of Oz fly in and rip you limb from limb. And then what’s left of you is set on fire and left to burn in a dumpster.

I’m trying to find a strong enough word for the pain. Agony? Excruciation? I could feel every cell in my body individually dying — probably because they literally were.

Somewhere between mile 22 and 23, I reached downtown Fargo. This is the iconic stretch of Broadway where you run past the Fargo Theater, and tons of people are out to cheer. Earlier in the morning I had had visions of reaching this point, and how surely it would result in a euphoria that would carry me to the end.

But do you know what happened on Broadway?

I stopped, put my hands on my knees, crumpled to the ground, and curled up in a ball. I curled up in a ball in the middle of the road! There were no thoughts going through my head except one long “Noooooooooooo.” No to running. No to pain. No to life. I heard footsteps around me as runners passed, and figured it was only a matter of time before someone yelled for a medic.

I was down for about 10 seconds before I felt hands under my arms and I was hoisted up — but it wasn’t a medic. It was a fellow runner. He was wearing a National Guard shirt and looked like a real BAMF, you know? He stood me up, steadied me on my feet, looked me in the eye, and then shook his finger in my face and yelled, “YOU GOT THIS!” Then he high-fived me so hard my hand hurt, and took off.

And you know what? It worked. I started to run again. I ran through the pain all the way to the end, because, in the words of modern day wise men Rascal Flatts, “When push comes to shove, you taste what you’re made of.” And it turns out I’m made of grit. Who knew? When I crossed the finish line, I immediately burst into tears. There was my sister Sarah, and my dad and Nicole, and our friends Scott and Stephanie, and I didn’t have to run anymore, and it was over, and I had done it. I had done it! The thing I had never been sure I could do. But I did it anyway. I earned those ugly tears

I finished in 4:27:14, faster than even my secret stretch goal. And I will love Fargo for the rest of my life.