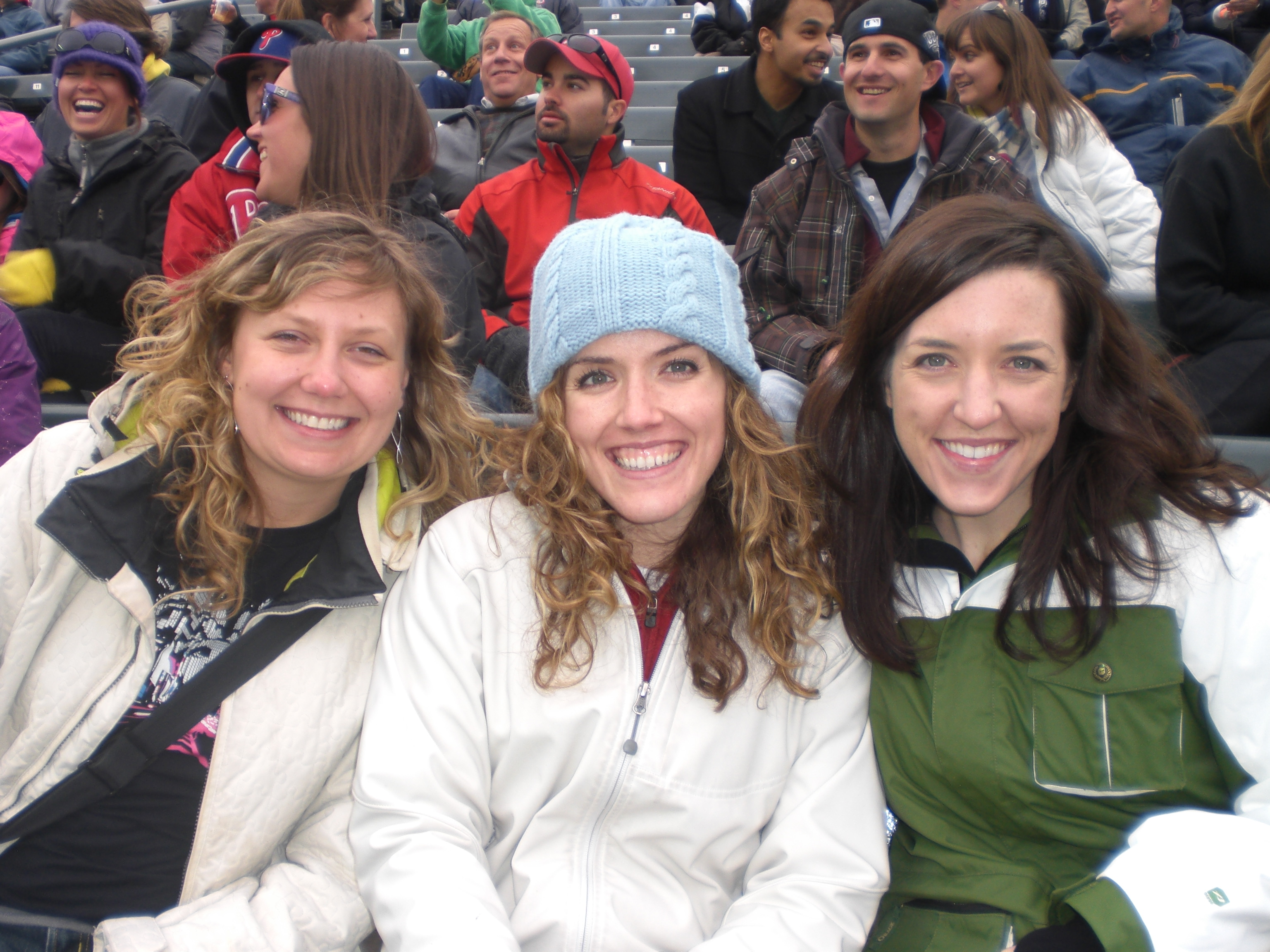 Not only am I HERE, but I am not depressed, despondent, or dead, either.  On the contrary, I am very much alive!  Thanks for being concerned, though, ye who have reached out.  I guess I’m just taking my time living life these days.

I have a new favorite song: “See You in the Spring” by the Court Yard Hounds and Jakob Dylan.  The subdued verses bloom into one of the most satisfying choruses I’ve ever heard.

You know how today is May 13th?  That makes yesterday May 12th.  And that makes it all the more astounding that yesterday it SNOWED.  It snowed here in Denver.  In mid-May.  It was actually one of the coldest days since I moved here – or maybe it just felt like it because I was outside at the Rockies game.  In the wintertime. But here we were – bundled up.  Those are my lovely co-workers, Leigh and Gina.  And that is me in Gina’s boys’ x-large snowboarding jacket.  The Rockies won in the bottom of the 10th with a home run.  By that time, we couldn’t move our faces.

“Lost” is almost over – over forever.  Since I don’t own a TV, most Tuesday nights I go to the gym in hopes of one of the sets being tuned to ABC, fully prepared to elliptical my ass off (literally, hopefully) for the entire 60 minutes.  Usually, though, 24 Hour Fitness does not have ABC on – and I’m way too terrified to change the channel in front of all of the scary men glued to SportsCenter.  So I wind up watching “Lost” online later.

If you haven’t watched the episode from Tuesday night, don’t worry – no spoilers here.  Except, I will say one thing: Allison Janney is one crazy mofo.  I LOVE HER.  Such a freak.

Last night, a guy asked me if I would refer to a certain movie as a “romantic comedy.”  I informed him that we well-seasoned ladies call them “RoCos,” thank you very much.

The other night, I was lying in bed when I saw a SPIDER crawl out from under the sheets.  I quickly killed it – but I didn’t scream.  I just went on reading.  And I slept in the bed.  This, I believe, is what we call “progress.”

Some people pay off their student loans.  I buy plane tickets to people’s weddings.  I can’t help it, though – I love these friends.

You know who else I love?  My family.  And tomorrow, I will slide behind the wheel of the 20-year old Honda to drive to Kansas City once again to be with them.  Nine hours there on Friday, and nine hours back on Sunday – a straight-shot on I-70.  Remind me to renew my AAA before 5am tomorrow morning.