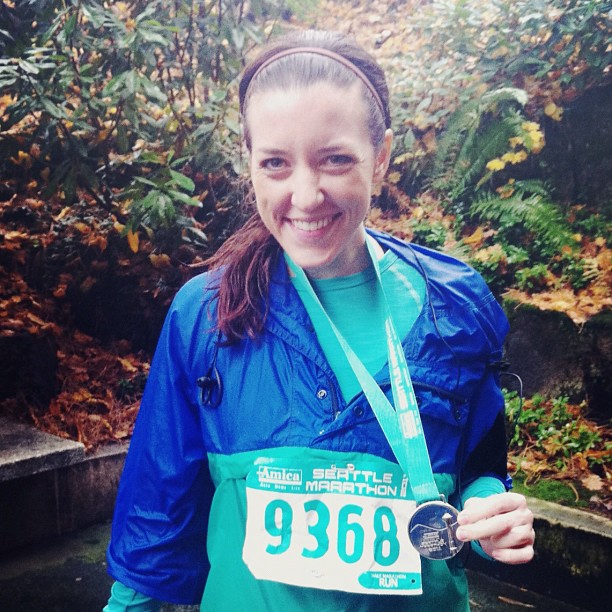 On Sunday, I ran the Seattle Half-Marathon, and man alive, was it fun.

(I just really think that “man alive” should be brought back as an exclamation – “man alive,” and “hot damn.”)

Back in September, I had the thought, “I want to train for something.”  So I went online, looking for a race that would be in a city that I wanted to travel to, and a course that I would like to run.  I realized that Seattle had a race on the Sunday after Thanksgiving; I did the math, and figured out that it was 12 weeks away, to the day.

Serendipity (not the movie) – I started training that night.

The 12 weeks flew by, and before I knew it, I was standing in a crowd of 11,000 people before the sun came up on Sunday morning.  I didn’t train with anyone, and I didn’t run with anyone – I just showed up, jumped into the sea of runners, stared at the people around me, and then ran across the starting line and didn’t stop for 13.1 miles.

But there I was, by my own volition, running my third half-marathon.

For the first 10 miles, I ran a 9-minute mile pace.  For a girl who never runs faster than 10-minute miles, I don’t know where that extra jolt came from – all I can think is that training at Mile High and then dropping to sea level is the way to go.  The last 3 miles were a bit slower, but in the end, I cut 6 minutes off of my previous best time, finishing in 2:03:13.

As I ran, I was struck with how much FUN I was having.  I was just so happy –  traveling through my favorite city on earth, my body cooperating better than I could have hoped, carrying me up hills and around turns and past the man with the hairy back and the woman with the long, whipping, Texas polygamist compound braid.  I watched the people cheering on the sidelines, laughing at some of the signs (i.e. “Worst parade ever”).  I saw my mom and our friend Lisa three times along the course; they win the prize for the best navigation of Seattle streets.  At one point, I swear, I think I saw Vili Fualaau.