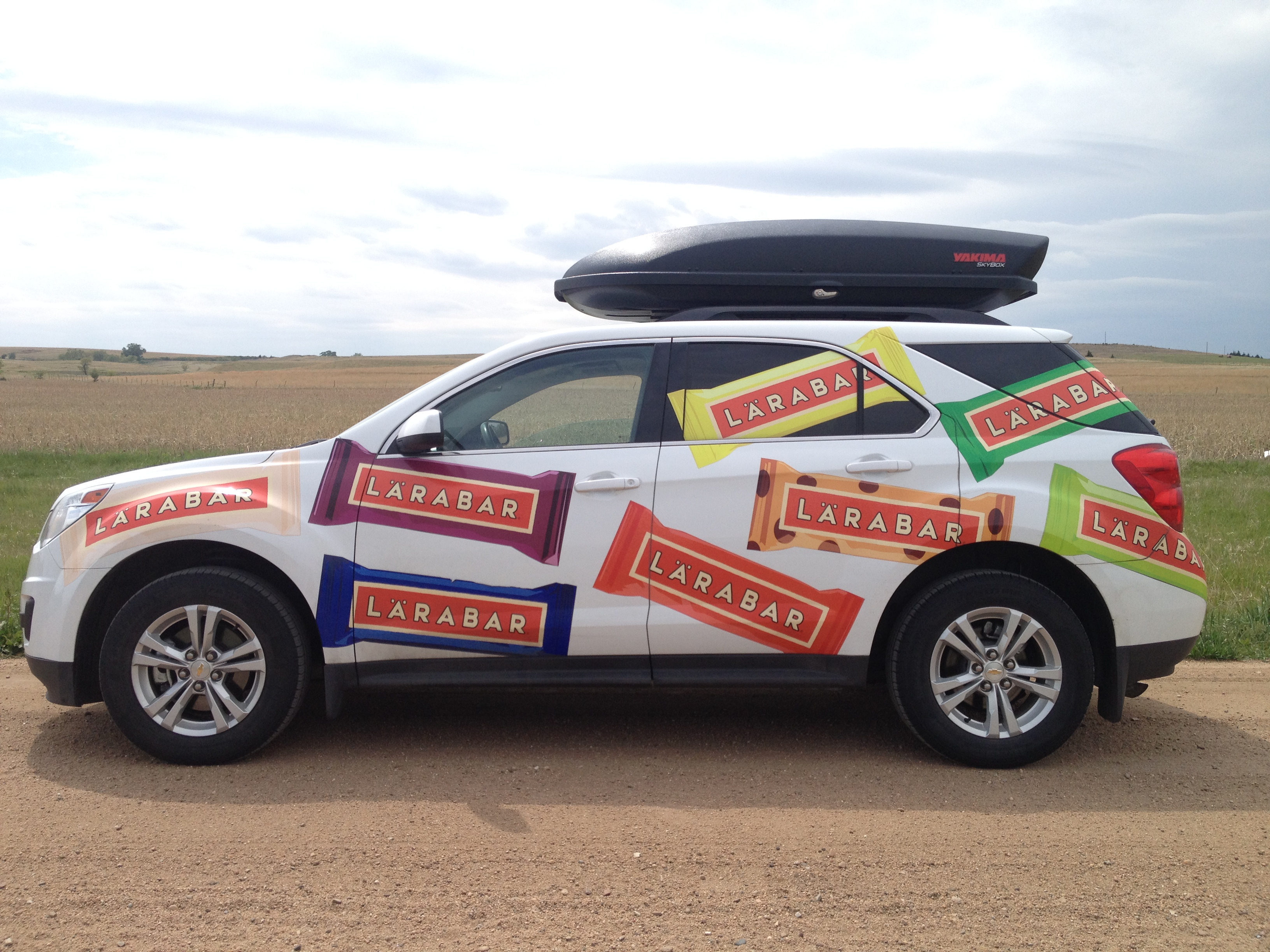 Wait. Let me back up. I’m currently in Nashville. I drove here.

I was in Minneapolis last week, flew back to Denver Friday night, loaded up the car, and headed east first thing on Saturday morning. A quick stop over at my mom’s house in Kansas City on Saturday night, and another in St. Louis on Sunday afternoon (to see one of my dearest friends, THE Juliette Genteman), and by last night, I was pulling into the driveway of Brandon and Miranda – or as I like to call them, Mirbranda. Everything about this trip has been tops.

Back to Saturday. In the middle of Kansas, I took a detour and wound up at Mushroom Rock State Park – probably the tiniest state park I’ve ever seen (5 acres), and the strangest phenomenon: gigantic alien rocks standing inexplicably in the middle of farmland, an agricultural Stonehenge. Foxy and I jumped out to snap a few pictures, and – oh. This is where I show you the vehicle I was driving. Nice and loud, right? It attracts a lot of attention. So I wasn’t surprised when a woman approached me. “You’re from Colorado?” she asked. “I’m heading there tomorrow. Anything I just gotta see?”

She looked to be about 65, maybe a little older. She was driving a little white pickup with Florida plates, the topper on the back packed to the brim with her things. Her spunk was all too clear, as I soon learned that she was en route to Wyoming to work on a ranch for a few months – much to the worry of her children.

“But you know, I just tell them, you’re only old once!” And she laughed with her entire body.

I asked her to take a picture of Foxy and me in front of the rocks, and she was happy to oblige, calling for the dog’s attention: “Roxy! Roxy!” I didn’t bother to correct her.

As I was leaving, I pulled out a box of bars and offered them to her. Her eyes wide, she immediately raised both of her hands, fingers spread, and aimed her palms at me: “Oh, nooooo, I couldn’t possibly accept!” I told her that it was okay, that I work for the company, and that part of what I do is give stuff away. I opened the box and showed her all of the different flavors, and said, “Please take them!”

She thought about it for a second, and then said, “Well, do you like cantaloupe?”

And before I knew it, she reached into the bed of her pickup and pulled out half a melon, covered in foil.

“Oh, that’s okay –” I started, but she cut me off. “No, take it! Fresh from the farmer’s market this morning.” And with that, I traded a box of bars for half a cantaloupe – because don’t you want to live in a world where melon is currency?

I opened the car door and Foxy jumped in, the lady calling after her, “Bye, Rocky!” And then she turned to me and said, “Remember – don’t talk to strangers. We never met.” I smiled and laughed and said, “I won’t tell if you won’t tell,” as I buckled up and got ready to leave.

When I started to pull away, I noticed her next to the car waving her arms. I stopped and rolled down the window. She trotted up alongside to say, “Don’t forget a spoon.” And she handed me a plastic spoon, because maybe I’d want to eat the cantaloupe out of my lap while flying down the interstate.

I never caught her name.