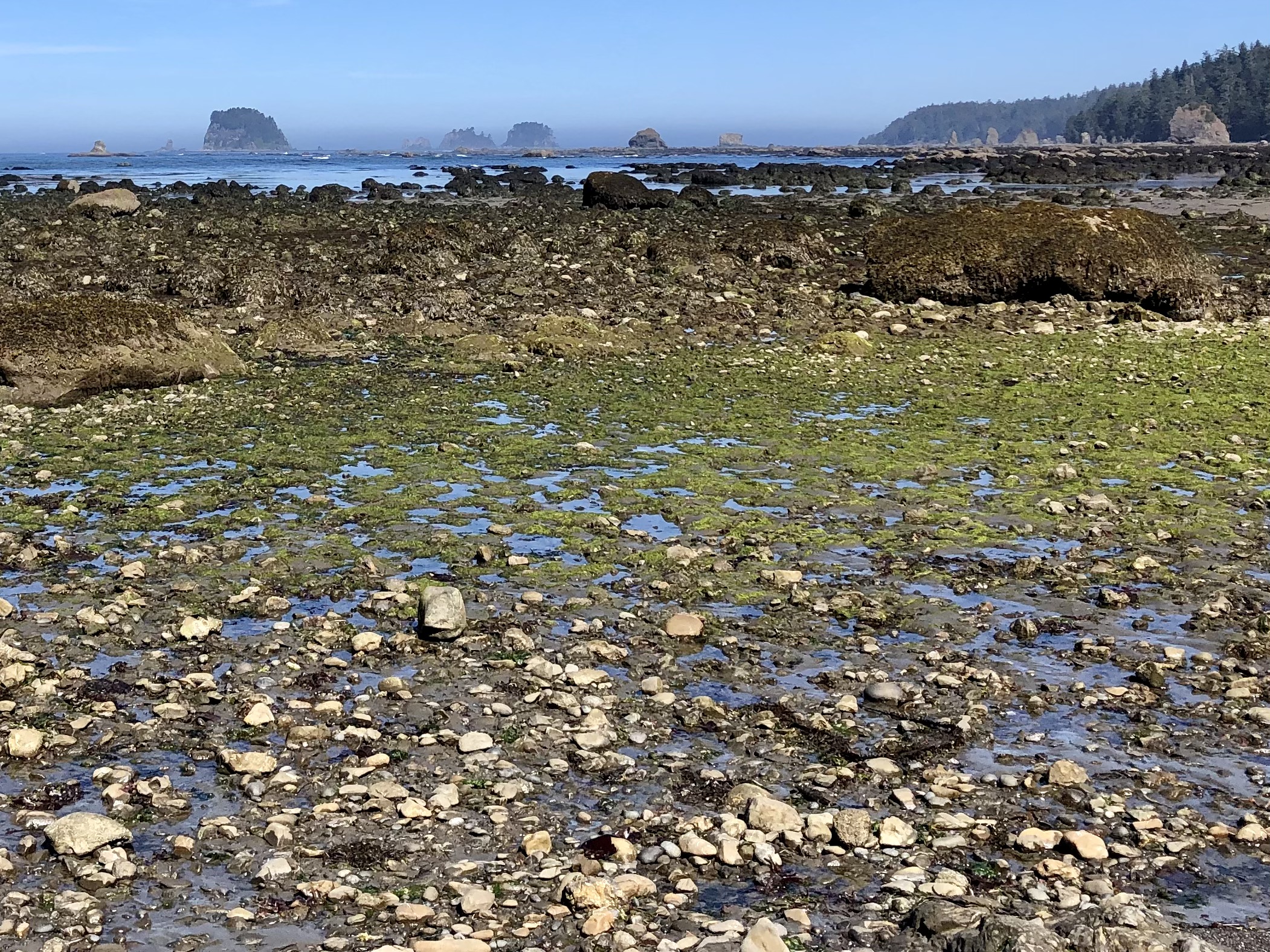 Still miles from the water and beneath a canopy of trees, the scent reached me first: salt, and the sharp brine of seaweed. Then came the far-off white noise, faint at first but, as I grew closer, steadily separating into a rhythmic ebb and flow, water against rock. I continued my long descent of the trail and the forest began to thin – light, light, and finally, there it was. Open sky and the Pacific Ocean.

The beach was rocky, low tide revealing an endless expanse of tidepools. I was lucky; I hadn’t thought to check the tide, but the three miles I was now set to hike south along the shore would be made much easier with the waves far away. Stepping carefully, I began to pick my way down the beach, now spotting the long, tangled braids of bull kelp I’d been able to smell an hour ago.

Seaweed tastes the way it smells, doesn’t it? Back when I lived in Denver, I had a regular spot for most first dates: a Japanese restaurant near Commons Park where I would order a seaweed salad and a glass of Pinot Grigio. There were a lot of dates in those days, a lot of seaweed salads and many glasses of wine. But it’s been a long time since both drinking and dating – one, because when I drink I don’t always know when to stop, and two, it’s hard to date when you’re trying to have a baby.

I came so close. After 18 months and more tries than I can count on one hand, he was finally real. I had a picture of him. My friend Melissa held my hand and watched on a screen as the doctor transferred him into my womb – not the way I pictured getting pregnant, but hey, it worked. At least, it worked for a little while. In February, I got the call that he was there. In March, I got the call that he was not. I immediately booked the trip I am now on.

I would’ve been six months pregnant. Instead, I am standing on this beach.

A crab scurries past my foot and disappears beneath a large rock. I think of the stories on the news about hermit crabs mistaking trash for shells, making their home inside a plastic bottle cap or the metal base of a lightbulb, and my spirit howls – but I also understand. Who among us hasn’t sought refuge in a less than ideal place? This world offers imperfect options. We’re all just trying to live.

I find it to be a tricky balance: joyfully making the most of my life as it is, and dreaming for more. The two are engaged in a constant tug of war, gravity and undertow. I bargain with God, saying, “I’ll give you this if you give me that,” but it doesn’t work that way.

I let the waves pass over me – gratitude and grief, first one way then the other – and I wonder what will become of my life. Perhaps only time will tell. After all, the rocks on this beach are weathered – worn down, worn away. But they have also weathered – withstood the test of time. Like a contronym, life is often defined by opposites.

So here I am, standing at the edge of the world, both perfectly at peace and woefully incomplete, scanning the horizon for hope. But something tells me it’s a scent before a sound, and a sound before a sight.