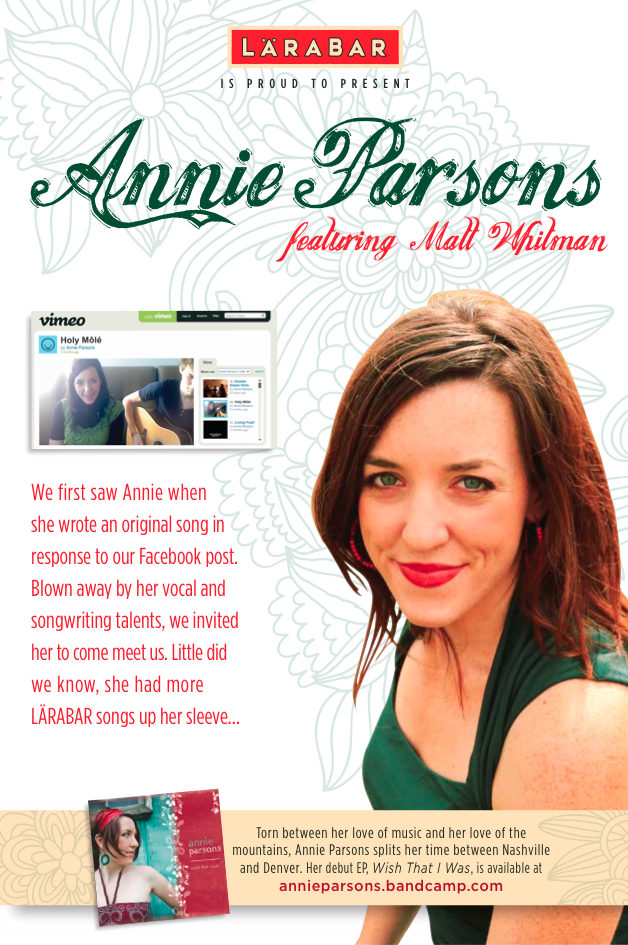 A few times, I’ve mentioned the fact that I’ve been working on a secret project.

And each time, I’ve thought, “I’ll tell everyone what I’m doing soon” – but it just hasn’t happened.  I’ve written about things like Zumba and ants and Tom Hanks as Animals instead – because I just couldn’t help it (and really, who could blame me?)

So months have gone by, working on this secret project, and now it’s happening TOMORROW, and I still haven’t even told you what it is.

Remember when I wrote a little song about LÄRABAR?  And they rewarded me by sending me bajillions of Cocoa Môlé?  Well.

It turns out that LÄRABAR is based in Denver.

And it turns out that they’re really, really nice people – and they like ME, too.

So they asked me if I could come up with some more songs about the brand, to which I replied, “Holy môlé” – and then a resounding yes.

Some fast and furious writing has taken place, and tomorrow, I’m flying to Southern California to perform these LÄRABAR songs at Natural Products Expo West.  Need proof?  Here’s the poster: Oh, and you might be wondering who this “Matt Whitman” is.  Well, in addition to being my co-writer for these songs (and they truly would not have gotten written without him), he’s a Louisiana redneck who shoots squirrels and cooks them in gumbo.  He’s also a farmer who knows how to grow vegetables.

All I’m saying is that when the world ends, I want him on my team – because when the LÄRABARs run out, this guy will keep people alive.