In her own words: Kodi’s trip to the Northwest 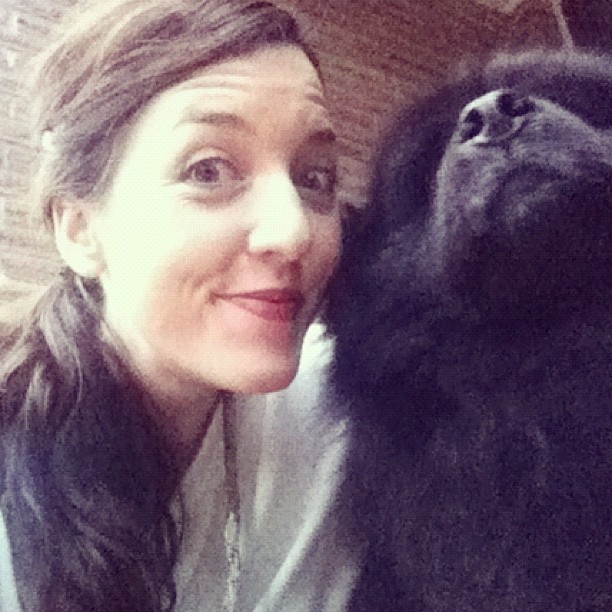 A week ago Saturday, Annie opened the front door.  I ran through it.  She had my leash out, so I knew we were going somewhere – but instead of walking around the block one time (as far as I can walk), she lifted me into her car.

I like to ride in the car.  I lean against the backseat, and breathe really hard.  I never know where we’re going, but it’s always exciting.

This time, Annie started driving, and she just didn’t stop.  For almost 14 hours, she drove.  I panted the whole time.  Annie thinks I have dragon breath, but I am not a dragon.  I am a dog.

Sometimes, we would stop at a gas station and Annie would lift me out of the car and tell me to pee.  Sometimes I would and sometimes I wouldn’t.  Annie would talk to me out loud, and say things like, “Toad, you need to pee,” but if I didn’t want to, I wouldn’t, because I am a dog and I do whatever makes sense to me.

The next day, we only drove 7 hours.  When we finally stopped, we were in a city called “Portland,” and the first place we went was a guy named Mike’s house.  Mike is very tall.  I hadn’t eaten any food since Friday because long, unexpected car rides stress me out, so Annie microwaved some white rice for me.  I ate it.

On the days that we were in Portland, Annie took me to an office that she worked from.  The first day, I was nervous because I didn’t know where I was, so I threw up on the floor.  It’s okay, though, because the floor was concrete.  Annie cleaned it up very quickly, and I wagged my tail because I felt better.

Forty-five minutes later, on those same concrete floors, I shat.  It was very un-like me, but in the moment, it just seemed like the right thing to do.  A stranger man discovered it, and went and found Annie and told her what I had done.  Annie cleaned it up as fast as she could and kept saying the words “I’m so sorry” to the people in the office.  I just smiled and wagged my tail, so no one could be very mad at me.

Portland was a wonderful city, because everyone there smelled like interesting things like incense and cigarettes, and they would stop on the street to pet me.  Portland really likes 3-legged dogs, and it’s a good thing, because I only have three legs.

A few nights later, Annie lifted me into the car again, and I started panting.  I panted for three hours until we got to a new city: “Seattle.”  I was so excited to arrive in Seattle, because we stayed at my friend Lisa’s house, and she has a backyard, and I love Lisa because she pets me so much and feeds me cottage cheese.  I was so excited to be at Lisa’s house that I ran all around the house, and even though her floors were made of a thing called “hard wood” and I slipped all over the place, nothing could stop me from running and being happy.

My time in Seattle was so nice, because Annie just worked and patted me on the head.  One night, we went to her friend Keith’s house, and it was very scary because Keith had knocked down walls in his house and was building them up again, and there were wires and tools around.  But Keith gave me a bowl of water and Annie a shot of whiskey, and everyone felt better.

On Friday, Annie didn’t work – she took a thing called a “day off.”  On this day, she went on a walk with Greta.  I couldn’t go, because Annie and Greta like to walk very far, and remember, I can only walk once around the block.  I was sad that they left me behind, so I chewed the wood around the back door of Lisa’s house.  It seemed like the right thing to do.

When Annie came back and saw what I had done, she seemed angry and sad and something called “embarrassed.”  She tried to fix the door for Lisa, and she told Lisa that she would pay for it to be fixed for real.  But no matter what she offered, she still felt sad that I had done this.  I didn’t understand why she was sad.  I just looked at her and wagged my tail, because I like Annie, and I’m happy every day and all of the minutes.

On Saturday morning, Annie put all of her things in her car, and lifted me onto the backseat.  We drove on a magnificent roadway called “I-90,” and when we crossed over Lake Washington on our way out of Seattle, I saw a tear roll down Annie’s cheek.  I think that she must love this city very much, and must have been so sad to leave.

We drove to a place called “Spokane,” and I met a baby friend named Eleanor.  I don’t think that I’ve ever had a baby friend before, but I was very nice to this baby.  She was like a person, but very small.  Also in Spokane, I saw a cat and barked as loud as I could and ran after it as fast as I could.  But I only have three legs, so I did not get very far.

The rest of the trip consisted of a lot of driving and Annie trying to learn all of the words to Nicki Minaj’s “Super Bass.”

I met many people on my trip, and everyone who meets me loves me.  But Annie says that she probably does not want to take me on a trip again.  I don’t understand, because I’m so nice and everyone likes me so much.  But Annie said that having me along was a thing called “stressful.”

Maybe it’s because I threw up inside and shat on the floor and destroyed a home.

But I am just a dog, and I do what makes sense to me.

I’m very happy to be back in Colorado.

And I know that Annie still loves me.