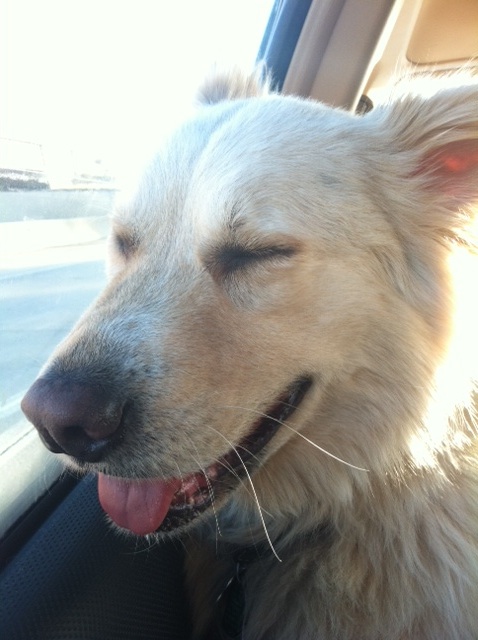 Yesterday, we had a bit of a canine emergency when Greebs the dog ate an entire plate of peanut butter & chocolate brownies, and we had to take him to the animal ER to have them induce vomiting and coat his stomach in charcoal.

Did you know that I haven’t thrown up since I was 14 years old?  Over half a lifetime ago.  I am terrified that it’s going to happen again someday.

For someone who has always been a stickler about having a clean car, the backseat of the Subaru has been coated in dog fur since June.  I would attempt to do something about this, but it would be like pushing a boulder up a mountain only to watch it roll back down.  The long-haired, muddy, vomit-induced dogs are in my car every single day.

The most unexciting thing to spend money on (besides bras and paper towels) (and also Sonicare toothbrush heads) would be a dog barrier for my Forester.  But if it would afford me a clean backseat?  It might be worth it.

Anyway, here’s yesterday’s protagonist on the way back from the vet, full of morphine. If yesterday’s dog emergency is any indication, this weekend did not go as planned, for all sorts of reasons.  I am someone who tends to measure my value by how much I accomplish (and yes, I know that this will get me nowhere – nowhere except SUCCESSFUL).  But I had a list of things that I wanted to get done, all of which remained unaccomplished.

That’s not entirely true.  I ran 11 miles on Saturday morning.

But that is ALL THAT I DID.

I didn’t take the pile of stuff to Goodwill.
I didn’t list the items on Craigslist.
I didn’t vacuum.
I didn’t respond to the emails and phone calls.
I didn’t return the sweater to Target.
I didn’t buy thumbtacks.
I didn’t do laundry.
I didn’t walk in the sunshine.

But the dogs aren’t dead.

So… woman of the year.