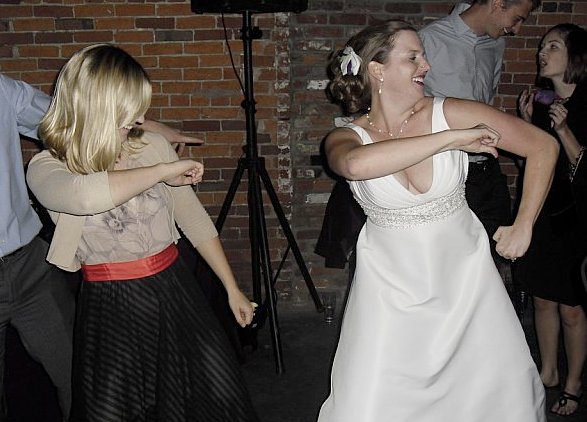 It’s clear from every wedding reception/bachelorette party/alcohol-fueled error of judgment that I am no dancer.  I’ve got rhythm, but I’m all kinds of awkward in my own skin – and this is never more obvious than when I am called upon to drop it like it’s hot.

But then there’s Zumba, the “Latin-based dance-fitness program” that has swept the nation.  I am, as usual, behind the times – tons of you have been on the Zumba train for years.  Case in point, here are my co-workers Emily and Kelli rocking their Zumba moves at Kelli’s wedding, because they are out-of-control awesome. But I?  I’ve been too nervous to go.  Listen, I may be all lips and eyes, but I’m also all hips and thighs – two things that I don’t really feel like calling attention to.

But I’ve been hating the treadmill.  And last night, I was feeling brave, so I decided to try Zumba for the first time.

Our instructor was a Colombian man in a tight shirt who spoke broken English with a lisp, and said enthusiastic things like, “This class is crowd tonight!”  And it was – the room was packed from wall to wall.

And then the music started.

And then the dancing started.

And everyone was SO INTO IT.

Everything went so fast, and just when I would catch on to what was happening, the moves would change.  These people were like border collies, so attuned to their master’s instruction that at the flick of his wrist, boom – they were box-stepping.

I, on the other hand, was like a dog in socks, stiffly turning in circles.

Zumba is full of what some might call “uncivilized” moves – swivels and shimmies and gyrations (sorry for saying “gyrations”).  If it’s true that hips don’t lie, never has it been more obvious that I’m practically a Puritan.  I tried to be as “into it” as everyone else, and to just let my body do it’s thang – which worked for a little while, until I caught my reflection in the mirror and realized I was doing the Roger Rabbit.

But this burning up the dance floor apparently burns up the calories, and I have never had 60 minutes of cardio go so quickly.

So Zumba, you have not seen the last of me – or my hips.